Over the past two years,Staufen Digital Neonex has worked with Saurer to build the most modern factory in the textile machinery industry.

Thanks to a joint Smart Factory vision, the intercultural team was able to create a plant that fulfills this ambitious goal. The project was led by the digital experts from Staufen Digital Neonex who were supported by their colleagues from Staufen China. They were responsible for setting up lean processes and leadership excellence.

Saurer is a leading globally operating technology company focusing on innovations for the processing of fiber and yarn, including machinery, components, and software. Founded in Switzerland in 1853, Saurer now employs 4,700 people in 13 countries. With an annual sales revenue of EUR 1,180 million, the company has been on a growth trajectory for several years.

Throughout its history, Saurer has been a leader in innovation. From textile to tires and e-mobility: The purpose of Saurer is to make any creation possible by offering endless possibilities to process fibers and industrial yarns. China is one of the biggest and most important markets for Saurer in the textile machinery business. To serve the key market in the best possible way, a factory meeting the most modern technological and organizational standards should be built in northwest China.

It was clear to Saurer that the new factory should be “smart” to ensure efficiency and modernity. However, it was unclear how this Smart Factory should be designed in order to deliver added value.

Furthermore, the project was set to be run by a highly diverse team of German and Chinese colleagues. This made a joint vision even more important, but also more challenging.

To generate a common understanding of what a Smart Factory could look like, the team went on a one-week

to Germany, visiting the forerunners of Industry 4.0. In combination with the results of an analysis of Saurer’s value stream, they developed an understanding of the biggest possible potentials and of the most relevant digital use cases.

Following the defined priorities, Smart Factory use cases were developed. Software-mockups helped to provide a tangible outlook of the final solution for the top management and ensured quick approval for implementation. The final question was how to implement the use cases and which partner to choose. A supplier selection process was conducted, considering vendors both from Germany and China.

When it comes to the implementation of Industry 4.0 use cases, IT architecture and IT infrastructure became core priorities. The goal was to integrate all applications on one Internet of Things platform. In alignment with the overall Saurer IT strategy, a private cloud concept based on microservices was chosen for the implementation. To ensure a smooth operation of systems, the factory was equipped with cutting edge infrastructure elements like hyper converged server systems and massive wireless communication infrastructure.

The new production site is a true embodiment of Saurer’s concept of a state-of-the-art Smart Factory. In China, the project was highly recognized by the media and television.

Do you want to get more impressions about this interesting project? Scan the QR code to get to the video. 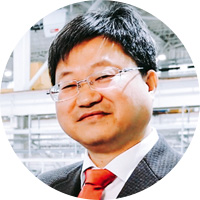 In Germany there is the Industry 4.0 initiative, here in China we have the Made in China 2025 Strategy. Our common goal at Saurer is to make the best out of these two programs and to connect both approaches, aiming for value creation through digitalization.

yixin liu, head of the saurer production network in china

The production site here in China is not only the most modern factory in our Saurer production network, but also in the whole textile Industry.

yixin liu, head of the saurer production network in china 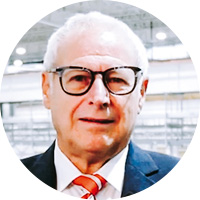 To be honest, at the beginning of the journey we were not sure what digitalization of operations means to us.